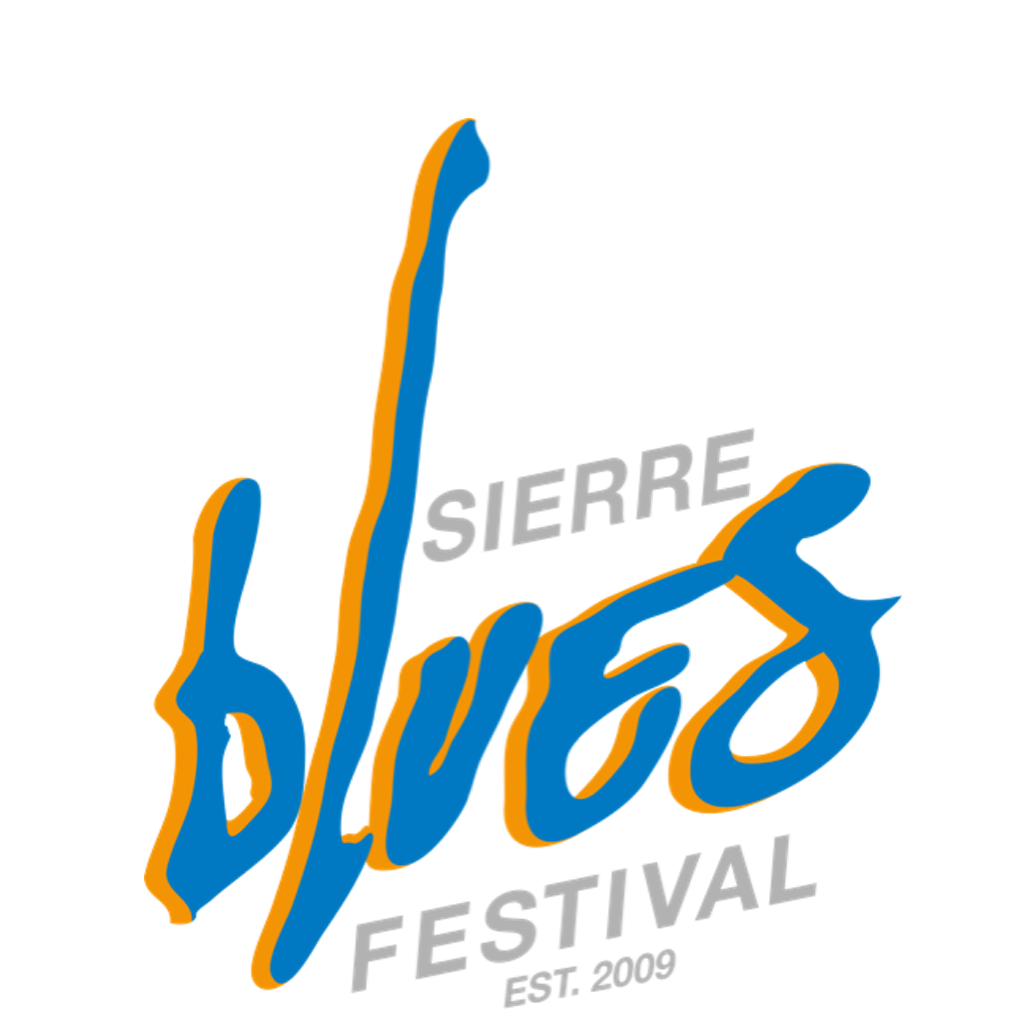 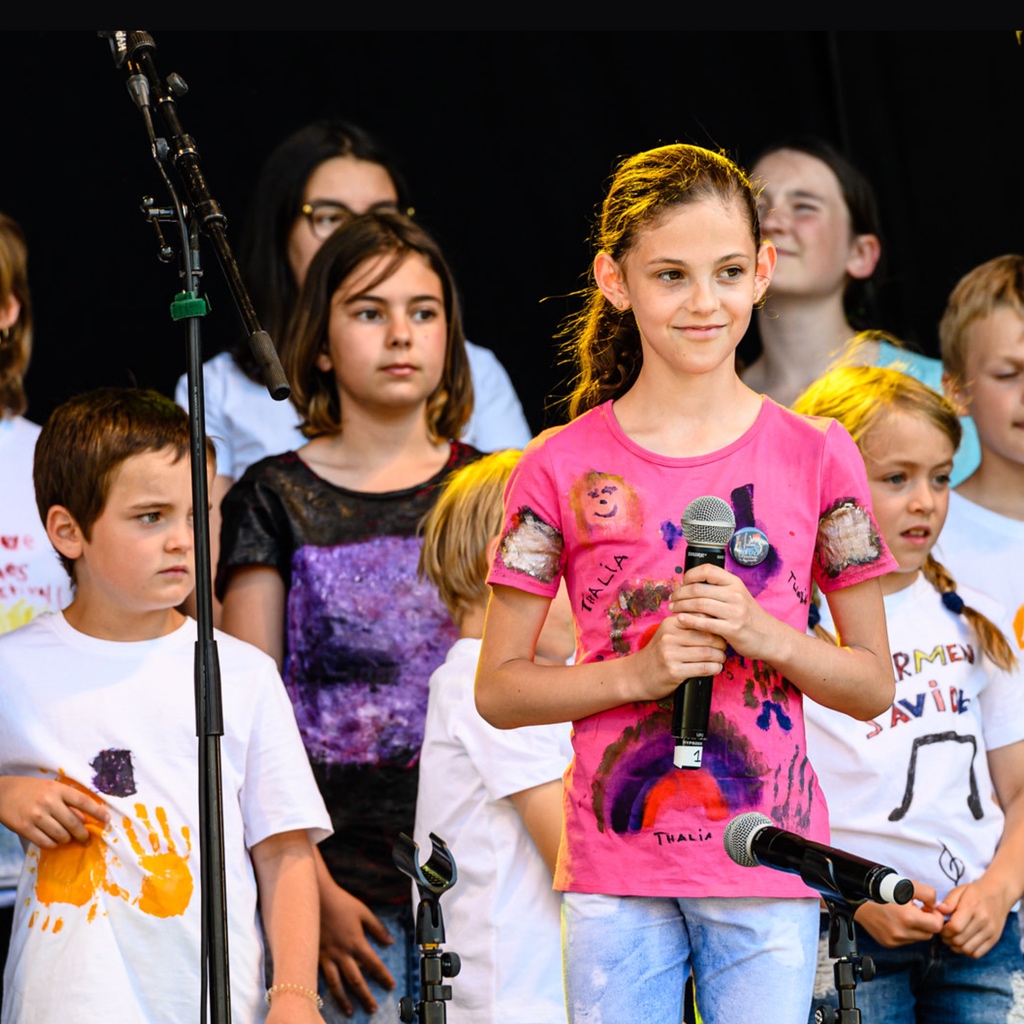 SIERRE BLUES KIDS is the result of a project started 10 years ago through the schools of Sierre to present, through singing, the Blues culture, the roots of American music, the values of tolerance to the next generation. It brings together in the form of a choir, students who have responded to the desire to sing Blues, under the expert guidance of Thierry Epiney. It is to them that the honour of opening this 13th edition will fall. 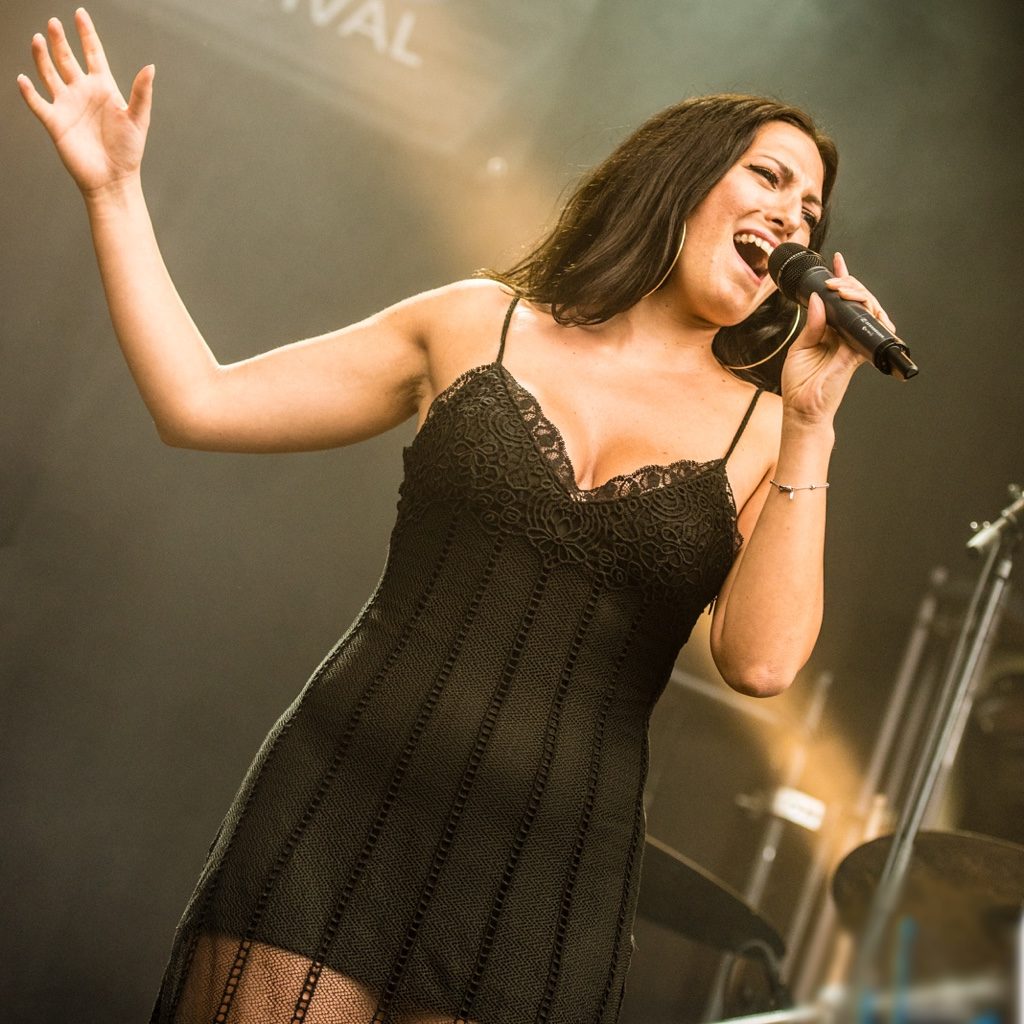 Soul, Funk and Rhythm’n’Blues in a powerful interpretation of a voice with multiple facets. The singer Sara Zaccarelli, who is able to combine all the nuances of black music in her performances, is back at the Sierre Blues Festival.

Born in Bologna in 1990. Sara is a singer with a strong blues background. In the last few years she has built a well articulated career with important names of the international jazz-blues scene such as Sax Gordon and Toni Green, performing in many European festivals. Her career is constantly evolving based on an explosive and energetic vocalism and a genuine passion. She will perform in Sierre with the Sara Zaccarelli Nu Band. Don’t miss it. 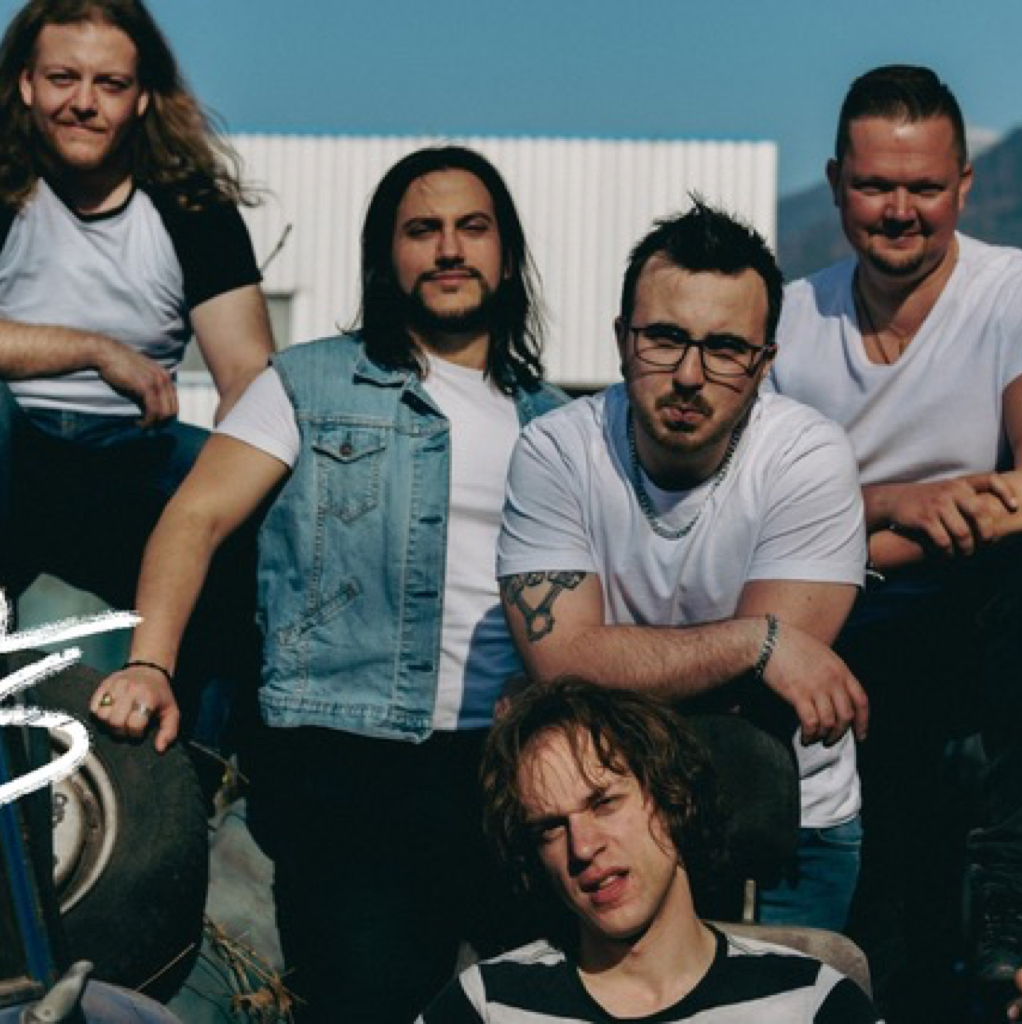 Gut’s is a rock band from the Lausanne region (Switzerland). The two founders of the band, Benjy (rhythm guitar) and Luca (lead guitar), rapidly joined forces with Fredd (vocals) who, together, put forward their rock style. Later on, Jonas (bass guitar) joined the band, followed by Lukas (drums) who completed the rhythm section. Their live show, accompanied by the pure sound of the guitars, is sure to get the audience going.

With his voice, his dynamism and his presence, Fredd captivates the public from the very first seconds – Luca’s solos torture the columns of amps – Benjy’s rhythmic riffs rigorously guide the whole band – Lukas hysterically hammers the skin of the toms while Jonas makes his bass lines roar. The Gut’s ensemble and the energy they give off stirs souls and structures, offering a show that will leave its mark on everyone.

Like a hurricane that passes by and leaves its mark, Gut’s is a band that gives its guts to the public and to rock’n’roll! 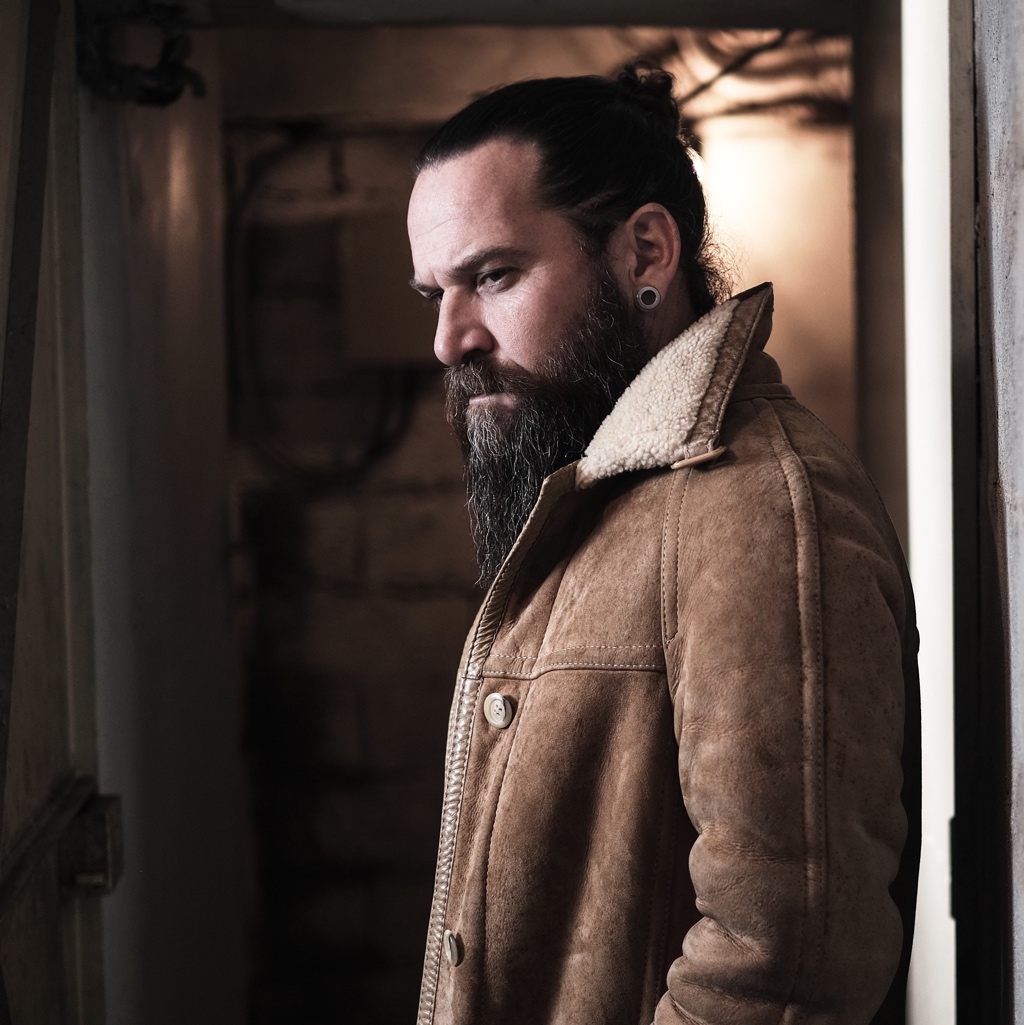 Will was born in Narbonne in a family of regional printers and writers. He found balance in football and music. With the influence and support of his father, he learnt how to play the guitar. At age 17, he created his first band that covered Californian punk style bands, followed by a second band more inclined towards Metal.

Through the following years, he wanted more purity in his music so that he started to give concert alone on stage. Then, the Weissenborn guitar, also played by Ben Harper, put a spell on him. He got original instruments custom made for him, thus mixing both his passions for music and wood.

With his Old School style inspired by Led Zeppelin, BB King and the Mowtown movement, he wants to go across the continents playing and sharing his music with the whole world. 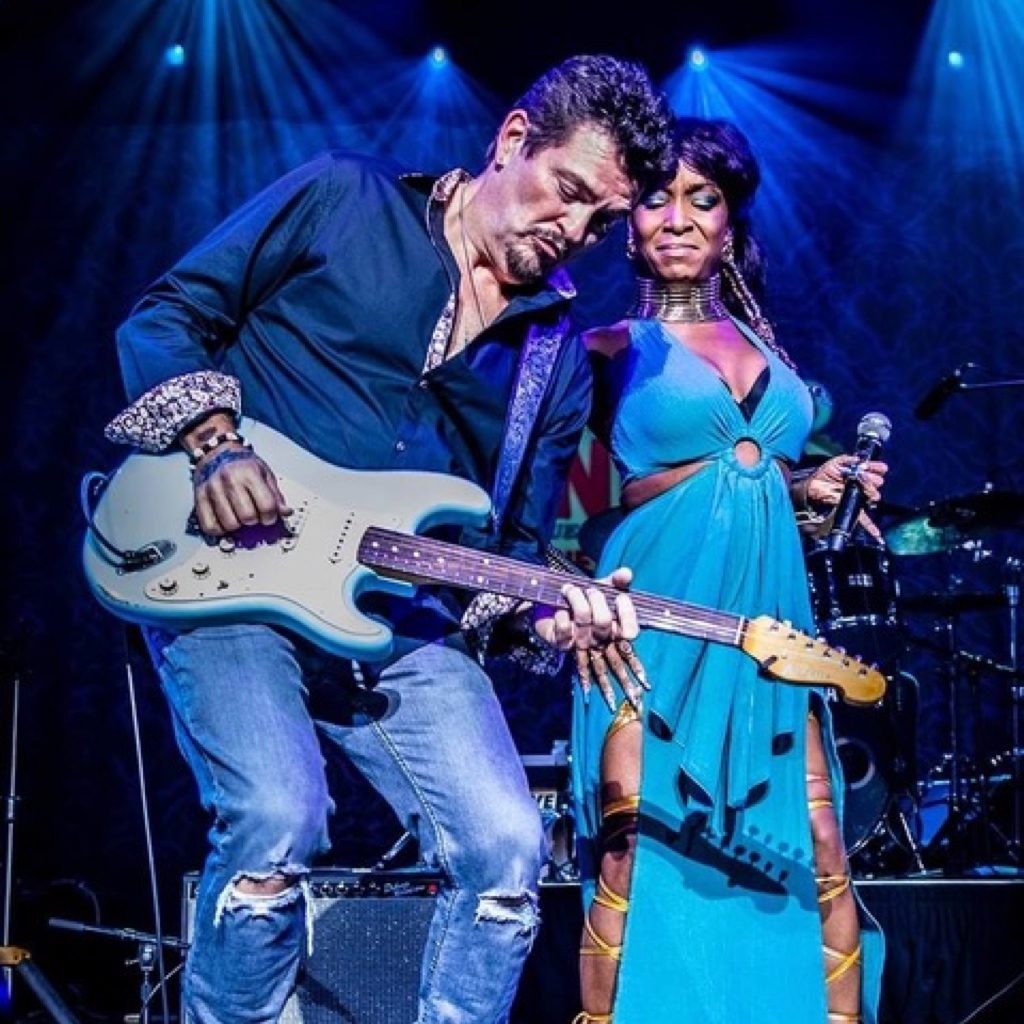 One thing singer Kat Riggins and singer, guitarist and producer Mike Zito have in common: they started making music from a young age. Zito started at age five and made a career in his teens, Riggins sang with her sister and other family members from a young age. She performed around the world and released two albums, mixing blues with hip hop, pop, rock, gospel, and even country music. Zito made his name as a solo artist as well as part of all-star band Royal Southern Brotherhood and released a string of albums, the latest being 2021’s ‘Resurrection’. After Riggins signed a deal with his record label two years ago, Zito produced her latest album ‘Cry Out’. Now they are joining forces and will perform together in Sierre. 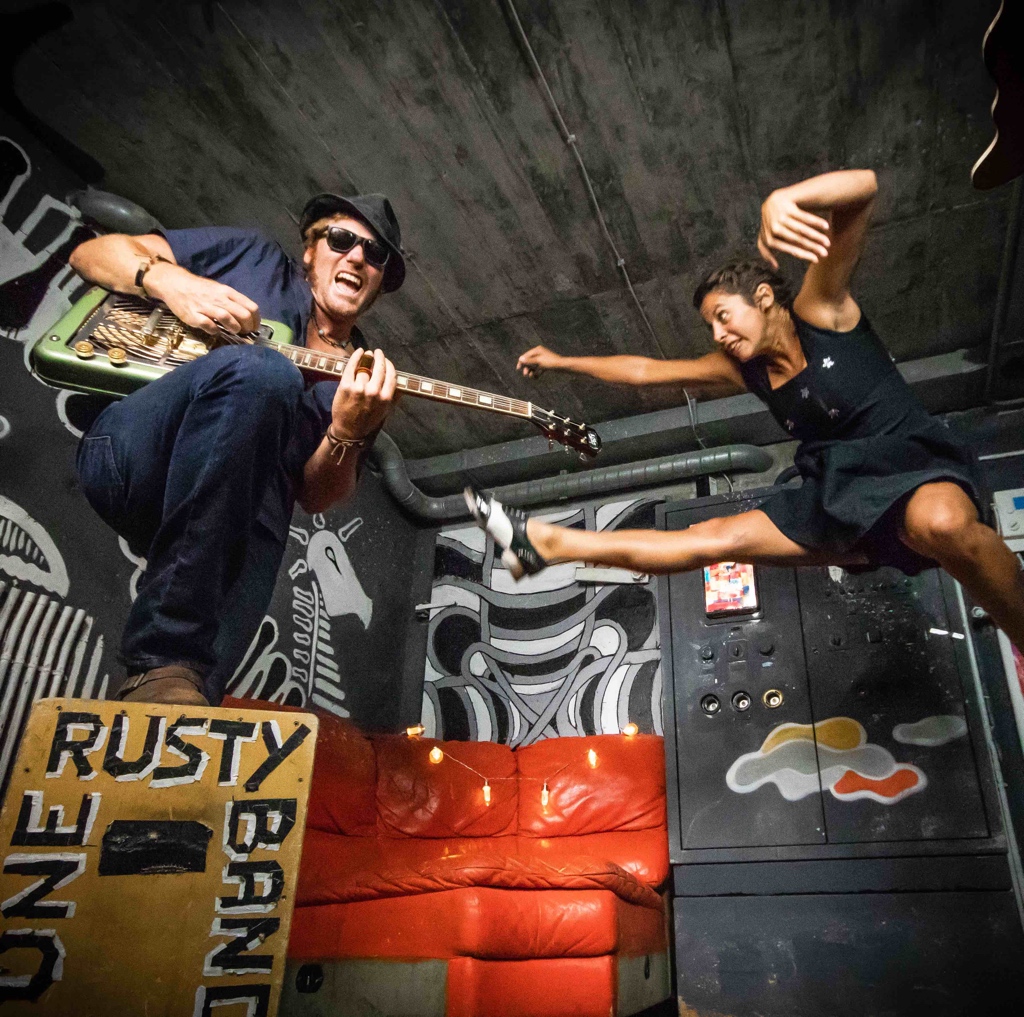 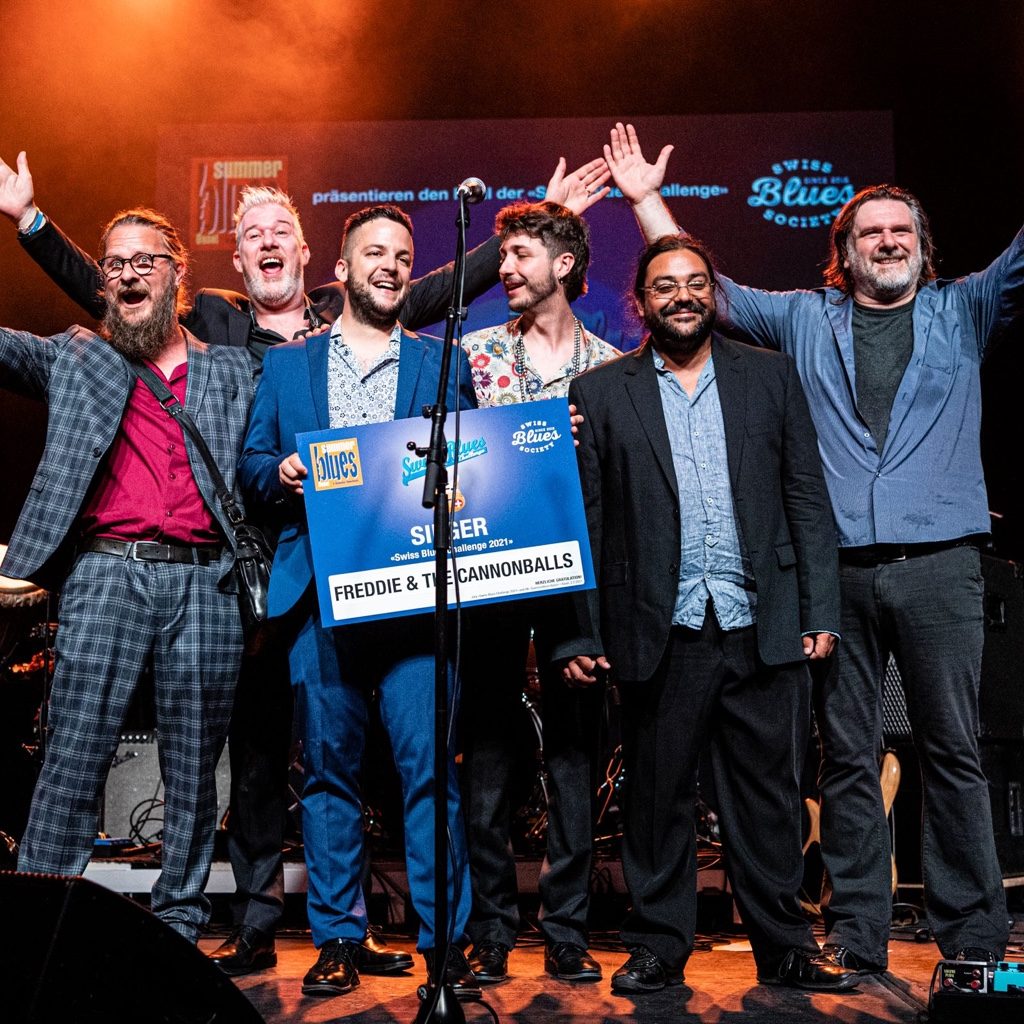 Freddie “Cannonball” Albertoni is a Swiss bass player who has been on the Swiss-Italian blues scene for 15 years. He was the founder of a renowned local blues/rock band called The Flag and for many years a bass player for legendary Swiss bluesman Bat Battiston. In autumn 2018, Federico Albertoni decides to take the frontman role, to start singing and to form his own 100% blues band: Freddie & The Cannonballs. The experienced and talented musicians who joined his sextet are his musical brother Mad Mantello (guitar), drummer Roberto Panzeri, organist Andi Appignani (who joined the band in spring 2021, one year after the original cannonball Chris Arcioni tragically passed away) and saxophone players Nigel Casey and Olmo Antezana.. Having a small horn section allows Freddie’s band to have the swinging sound of the blues of the 50s and to combine it with modern sounds too. The band’s repertoire features many original songs, some of which were recorded and published on their first record, i.e. an EP entitled “F” which came out in June 2019. Freddie & the Cannonballs then had the chance to perform at two major Swiss blues festivals: Bellinzona Blues and Lugano Blues to Bop. On July 2nd 2021 the band has the great honour of winning the 2021 Swiss Blues Challenge! This will give them the opportunity to represent Switzerland at the International Blues Challenge, which will take place in Memphis . During the summer of 2021 Freddie & the Cannonballs performed at some of the main Swiss blues festivals (Vallemaggia Magic Blues, Blues to Bop and Sierre Blues Festival). 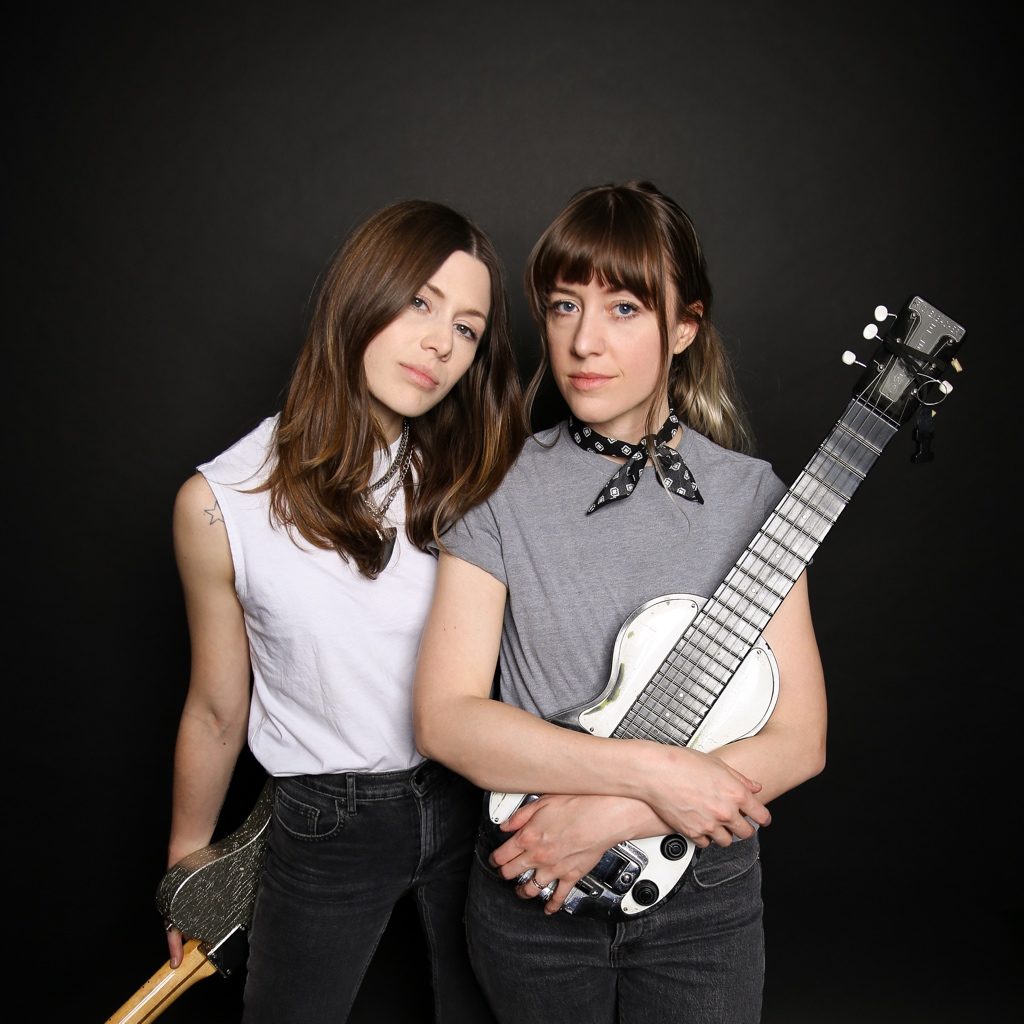 A duo of sisters, Larkin Poe is named for their ancestor Edgar Allen Poe, and it may be that heritage that informs their brooding, intense roots rock originals and reworking of classic blues songs. Since forming in 2010, Larkin Poe have proven a formidable duo both in and out of the studio. In 2014, producer T-Bone Burnett enlisted Rebecca and Megan for Lost On The River: The New Basement Tapes, a project that also saw contributions from Marcus Mumford (Mumford & Sons) Elvis Costello, Jim James (My Morning Jacket), Taylor Goldsmith (Dawes), and Rhiannon Giddens. The sisters have performed at such esteemed festivals as Glastonbury (twice) and Newport Folk Festival; have opened for and been in the backing band of Elvis Costello and Conor Oberst; and supported the likes of Gary Clark Jr. Rebecca and Megan were also members of the all-star backing band for the 2017 MusiCares Person Of The Year tribute honoring Tom Petty (also organized by Burnett) alongside Jakob Dylan, Jackson Browne, Elle King, Lucinda Williams, Gary Clark Jr., Don Henley, and Randy Newman. 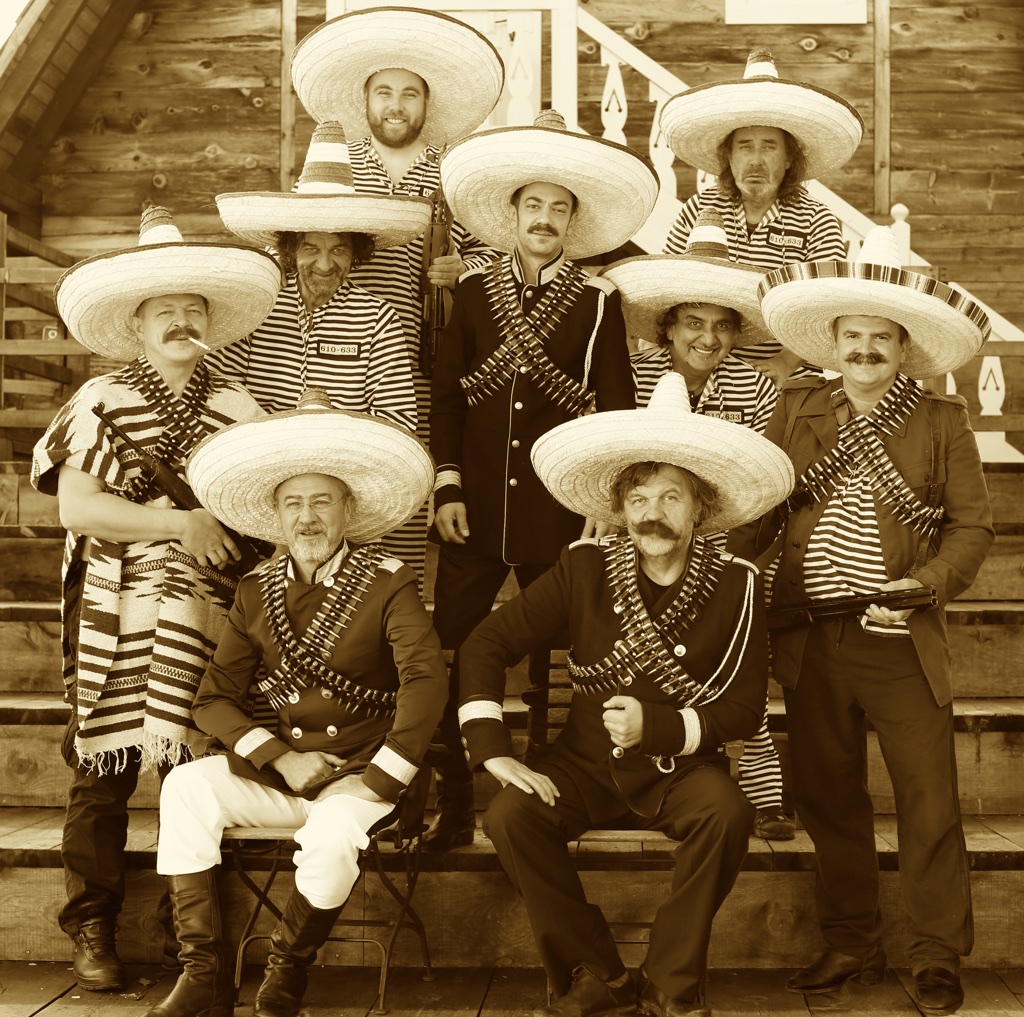 Emir Kusturica & The No Smoking Orchestra bring their boisterous sound in Sierre.

Highly praised as a filmmaker, Kusturica created the acclaimed The Time of Gypsies and holds two Golden Palms from the Cannes Film Festival. In the late 1990s Kusturica joined forces with The No Smoking Orchestra as the guitarist and the band went on to increasing international fame. The spontaneous theatricality that defines Kusturica’s films also permeates his musicianship, resulting in high-energy, eclectic performances with unadulterated, unpredictable showmanship. 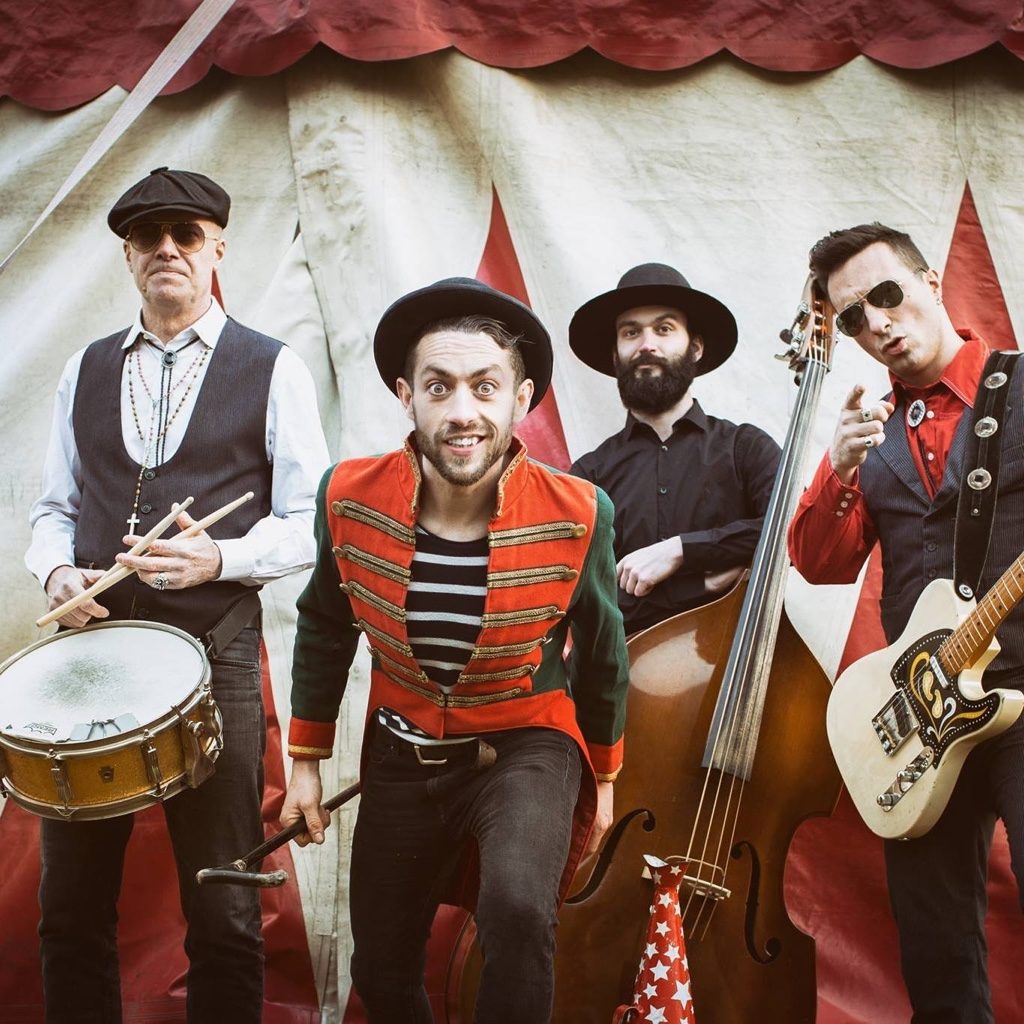 Slick Steve and The Gangsters are a “highly explosive” band from the Italian city of Brescia. Formed in 2011 by Anglo-Italian singer and showman Stephen Hogan (Slick Steve), and Alle B.Goode, a talented young guitarist with an all-consuming passion for Rock’n Roll. Making up the rhythm section skillful drummer Michele Zuccarelli Gennasi and the impeccable Pietro Ettore Gozzini on his towering upright bass complete this entertaining line-up.
The project is based on a conscious artistic cross over combining the band’s distinctive vintage and modern sound with circus style performance, alternating Swing, Rhythm’n Blues and Rock’n Roll with magic tricks and juggling.
This is a performance band which has to be seen live in concert. Slick Steve and The Gangsters transform a musical event into a jaw-dropping experience reminiscent of the golden age of rock. 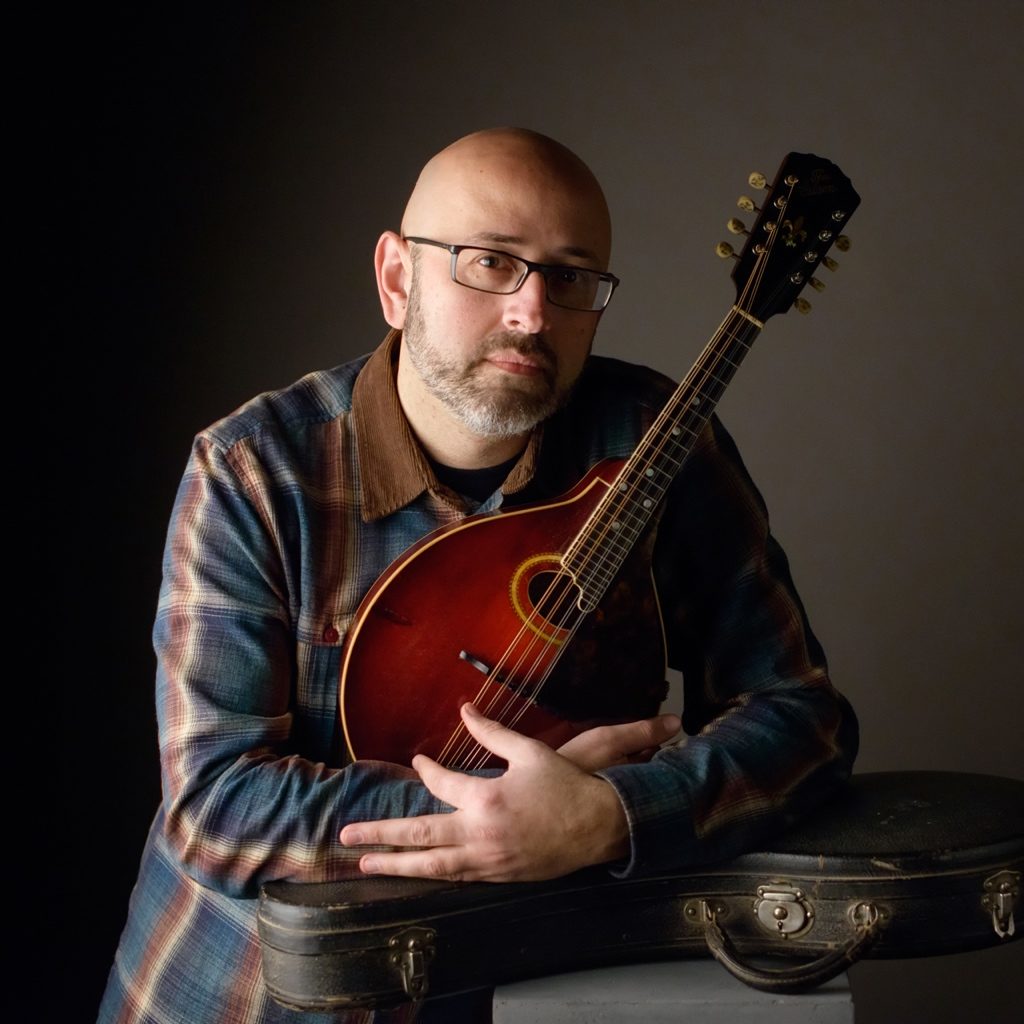 Guitarist, mandolinist and songwriter Lino Muoio has been a part of the Italian Blues music scene for over 25 years, playing many gigs and festivals with his main band “Blue Stuff” with various appearances on National television, and participated in many recording sessions for a variety of artists in Italy. Not many folks view the mandolin as a Blues instrument, but Lino believes the Blues and the Mandolin fit perfectly together! After the first solo album “Blues on Me” (2008), he decided to dedicate entire projects to producing a fine piece of work dedicated to the Blues Mandolin. The collaboration resulted in a diverse offering of styles, from the vintage country Blues inspiration of Yank Rachell to the Chicago style of Carl Martin, and a healthy dose of jazz, swing and bluegrass 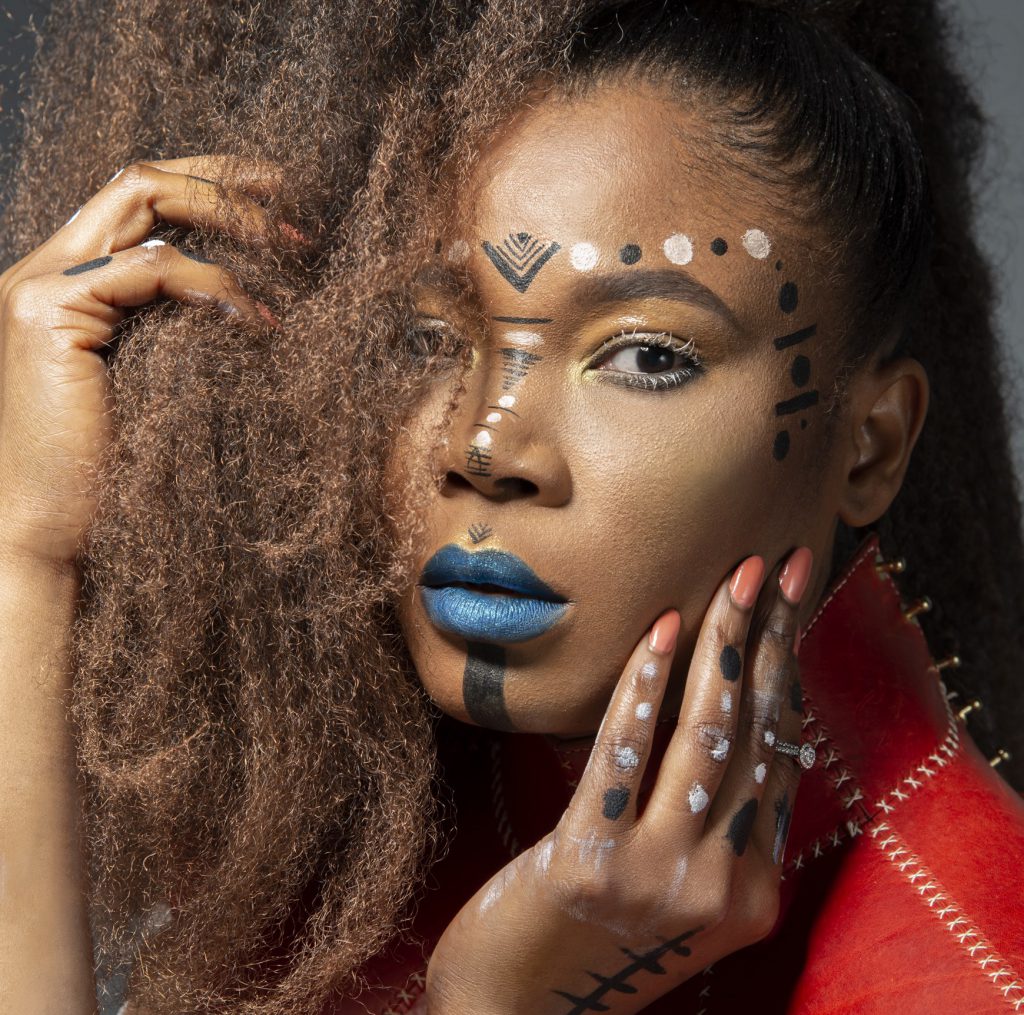 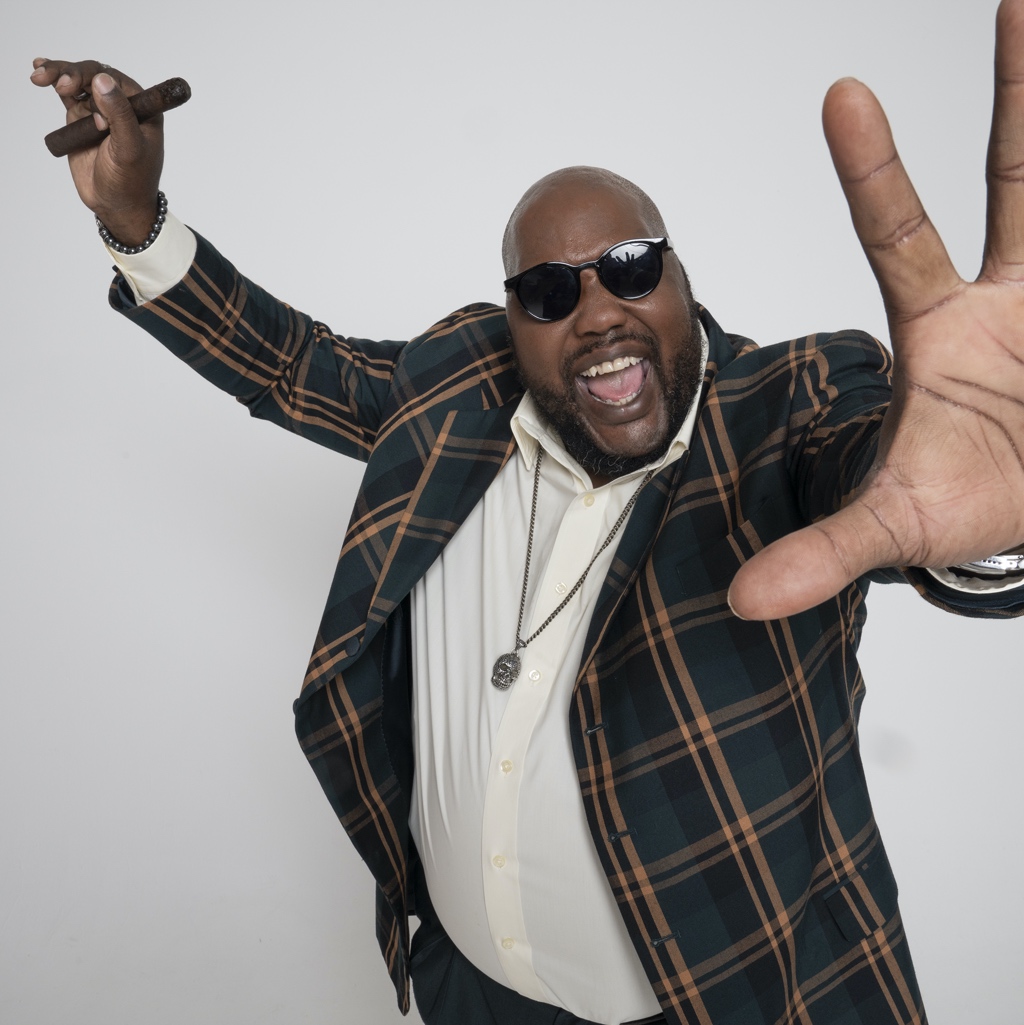 Soul blues singer Sugaray Rayford announces release of “Homemade Disaster,” a driving up tempo track that once again pushes the envelope much like he did on his 2020 Grammy nominated album, “Somebody Save Me.” An undulating surf guitar and playful percussive B3 organ create an expansive backdrop for stream-of-consciousness lyrics delivered with a dramatic flair. While the roots of the song are blues and soul, the production and instrumentation put a fresh spin on things, resulting in a track just as at home alongside Gary Clark Jr. and Fantastic Negrito as Black Pumas and Michael Kiwanuka. About the song, Rayford says, “America, we allowed this to happen on our watch – what we got here is a homemade disaster.”

Sugaray Rayford is a colossus of an entertainer with a voice so big it could knock a house down, yet at times, so tender it could “move you to tears” (UK Vibe). “A true badass marrying the funky soulfulness of classic R&B records while acknowledging contemporary sensibilities.” (Pop Matters) “Somebody Save Me”, Rayford’s first release for Forty Below Records was an ambitious album with “a sound that’s undeniably fresh and inspired.” (Albumism). It is “top stuff, indeed!” (Echoes Music Magazine). The album garnered a Grammy nomination for “Best Contemporary Blues Album” while also winning the prestigious “B.B. King Entertainer of the Year” award and “Soul Blues Male Artist of the Year” for the second straight year at the 2020 Blues Music Awards. 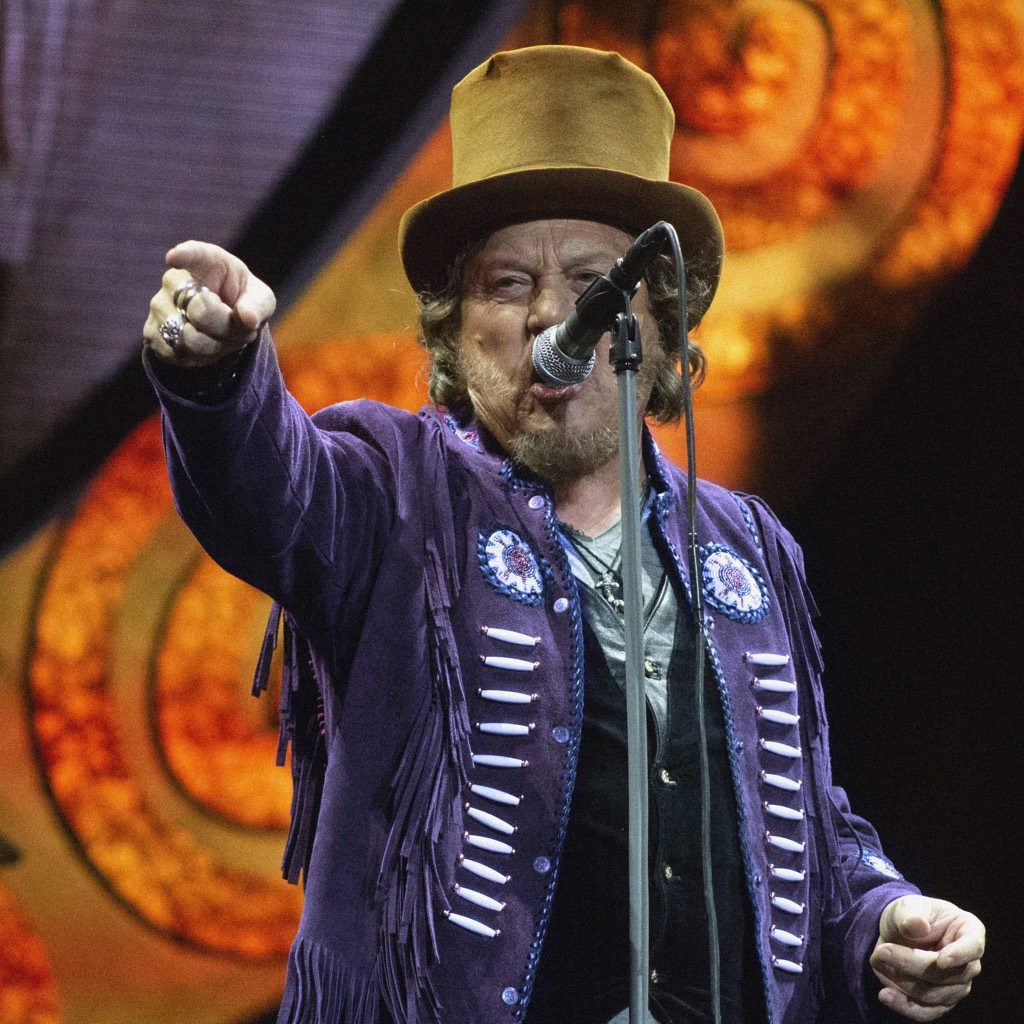 Celebrated Italian singer-songwriter Zucchero comes to the Sierre Blues Festival in June 2022 to perform one show as part of his World Wild Tour. This tour follows on from the global success of the Black Cat World Tour 2016, during which Zucchero played to over 1 million people in 611 cities, in 67 countries on 5 continents.

Zucchero recorded his first album in 1983 and his catalogue of hits include Senza Una Donna, his duet with Paul Young, Il Volo, Menta e Rosmarino, Diavolo In Me and Baila’. He has also achieved international success through his many collaborations with the likes of Luciano Pavarotti, John Lee Hooker, Miles Davis, B.B. King, Tom Jones and Sheryl Crow.

October 2018 saw Zucchero being awarded the Tenco Artista Prize, the most prestigious recognition for Italian singer-songwriters. 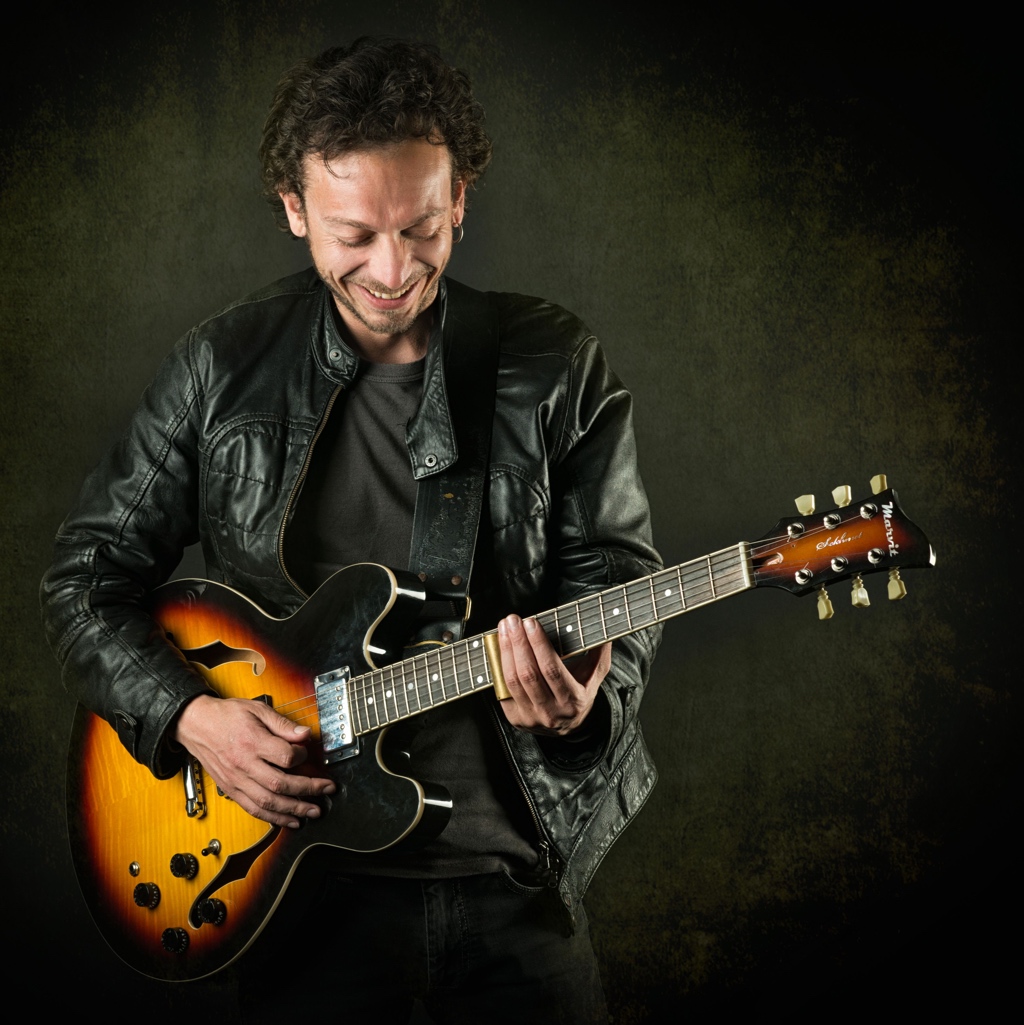 Gennaro Porcelli is considered by the public and the critics as one of the most important figures of the blues scene “made in Italy”. He is totally dedicated to the blues, the music that forged him. He expresses himself with a musical repertoire ranging from Chicago to New Orleans, from Austin to Memphis, as if to retrace Highway 61, the famous American highway along which the different styles of the blues have been developed. 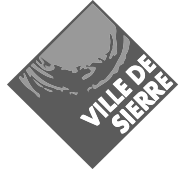